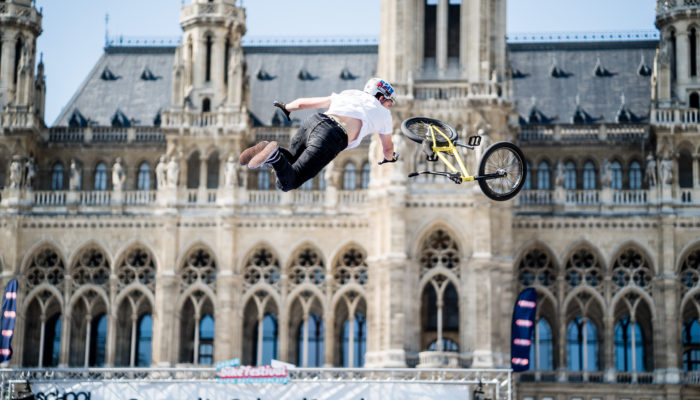 After a two-year break, Vienna’s Rathausplatz will again be dedicated to the “Argus Bike Festival” on April 2nd and 3rd, 2022, with 100,000 visitors the largest bike & bike event in Austria and the largest bike festival in Europe!

Bicycle-Festival at the Town Hall Square in Vienna

Heart of the festival, which also heralds the bike season, is the bike fair with more exhibitors than ever. Of course, there are also a number of program items and courses for visitors to take part in, such as a bike washing station or small repairs under expert guidance, a children’s bike world, e-bike test course and new this year: a public race in the wave track.

On the bike flea market second hand wheels and even historical bicycles can be bought. Anyone who wants to buy an e-bike in the near future can get to know and test the e-bike brands at the Vienna Bike Festival or find out more about gravel bikes and transport bikes.

Highlight on the Town Hall Square will be the “Dirt Battle Vienna”, where the dirt jumpers with a high jump contest and a Best Trick Contest, in which some of the best drivers from the FMBA-World Pro Tour will measure. DJ Mosaken will once again provide the appropriate vibes.

On Sunday, the Vienna Bicyleparade will start punctually at 12:00 noon on the car-free Ringstraße. Start is in front of the Burgtheater, the route leads to the Praterstern and then over the Ringstrasse back to the Town Hall Square.

In front of the unique senery of Vienna’s Town Hall, various show programs, test and interactive stations ensure the continued success and the unique atmosphere of this event. Admission free!

From the Hotel Zipser it´s just a short walking distance to the Town Hall Square. In a few minutes you are on the spot to experience and enjoy the Bike Festival.